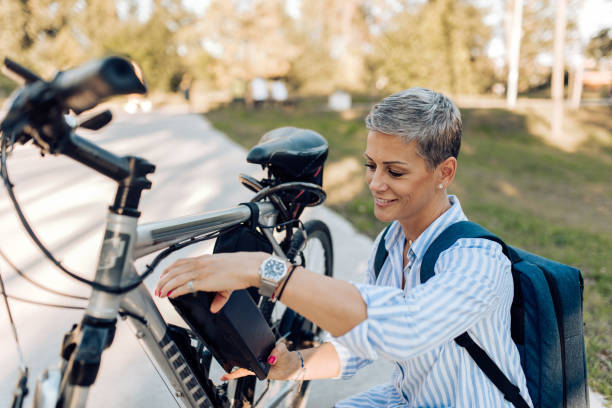 Mainly, electric bicycles can be categorized into two broad categories, depending on the location of the motor. If the hub motors are integrated in the wheel, often at the rear, the centrally located motors are directly integrated in the frame construction, in the area of ​​the crankshaft.

E-Bikes with the engine placed in place of the rear hub, this system being also known as "direct drive", benefits from a more resistant and faster propulsion unit, but which does not produce very high torque. Adding considerable weight and increased resistance to advancement, their efficiency is much lower than their potential. An advantage is that they can be partially recharged when they are disengaged and because they have no sliding parts they are almost completely silent.


There are also motorized rear hubs that allow the mounting of a pinion block and that do not look completely different from normal hubs. The higher torque compensates for the lower top speed, but a big minus is the lack of recharging option on the go, and the sliding parts contribute to a significantly higher noise.

The engine can also be placed in the front wheel hub, a situation that leads to a feeling of "all-wheel drive", thanks to the fact that the rear wheel is set in motion by the action of the feet. The sensation may be to the liking of some, while others will not be exactly happy about it. However, as the main advantage when the engine is part of the front wheel we can say the simplicity of repairs and maintenance, because it no longer takes into account the running gear complex of the rear wheel.

In the case of rear hub engines, more power can be achieved, mainly due to the fact that the design of the frame can better meet the demands in the rear area than in the front, which leads to a lot of other developments such as acceleration, cadence and torque adjustment. Of course, just as important details remain as the more complicated assembly process due to the running gear and moving the centre of gravity backwards, using these types of motors cantered on the rear hub, but they are generally preferred because the sensation does not differ. too much of that of riding a conventional bicycle.

Electric bikes with the engine located centrally have a frame specially designed to accommodate the engine in the area of ​​the crankshaft. This design has the advantage that nothing changes in the running gear of the bike, allowing the continued use of all speeds. Also, depending on the speed ratio used, the engine can adjust its contribution, faithfully reaching the specified level of assistance with increased efficiency. Specifically, in the case of climbing a hill, the centrally located motor identifies the reduction in speed and cadence and increases the power induced by the bike automatically. Perhaps just as important, with the motor located in the centre of the frame and the battery attached to one of the pipes in the front triangle of the frame, these electrical components do not block access to mechanical components, which makes a wedge repair, chain change, derailleur adjustment or any other operation specific to a bicycle, as easy to do as mechanical models. However, one thing to keep in mind is that electric motors on bicycles are intended to assist cycling, not to take over the entire load. If the engine is working longer than expected, then the user can expect premature wear of the components.

There would also be a variant of the electric bicycle in the form of the conventional bicycle that was fitted for conversion, a procedure that is not exactly complicated. At the moment, there are a generous number of conversion kits on the market that can materialize this transformation, at different levels of electricity and budget support. However, using this solution, the result will not be exactly similar to the use of an electric bike built specifically for this purpose.

Probably the most common of these sets. The series of operations includes the replacement of the front or rear wheel with the one containing the engine and then the electrical connection of the circuits to the control panel and the battery, which is in most cases located either on the rear trunk or in the support area. can. To these is added either a pedal sensor that is activated according to the cadence and speed with which it is pedalled, or a system that is kept constant at the speed and power pre-set by the user, regardless of the cadence and speed with which it is pedalled. 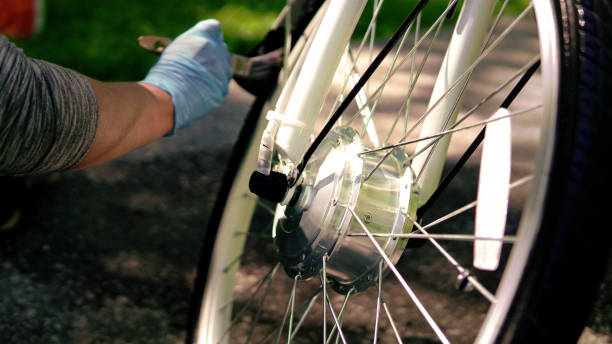 There are also centrally mounted conversion kits, which involves mounting the electric unit on a frame that does not have a special place for such a thing in the construction. Hence the possibility that not all types and models of bicycles can accommodate such a unit, so the offer of these types of kits is less extensive than in the previous case.

All-in-one wheels come as a very suitable solution for transforming a conventional bicycle into an electric one, because the rear wheel houses the engine, battery and control. Such products have found their consecration in the public space as a result of projects materialized through crowd funding mainly due to simplicity - in addition to the wheel that houses the necessary, a simple remote control must be mounted on the bike. The appreciation they enjoy is based on the fact that the appearance of the bike often changes marginally, and control options via smartphone, but also other facilities such as self-locking to prevent theft, only increase the attractiveness of gadget enthusiasts. Speaking of disadvantages,

Also made their place on the bicycle scene that helps you pedal. The motor unit is installed in the vicinity of the rear wheel, and a roller makes contact with it, thus setting it in motion. The only drawback is the significantly lower power compared to other systems.

Beyond all types of electric bikes, we can talk about two modes of engine operation - those that "assist" (help you while pedalling) to pedal and those that provide the same volume of power regardless of conditions.

This mode is often referred to as a pedelec because the engine only starts after you have started pedalling. Triggering and operating it is conditioned by keeping the pedals moving, which can be fun, given that you can reach high speeds by pedalling, but not entirely thanks to the power of your feet. Almost all electric bicycles with assisted pedalling allow you to adjust the power level of the engine according to the level of pedalling, having even ten steps of assistance. The simplest form of assistance is called a cadence sensor system , which provides only the amount of power chosen by the user, regardless of the difficulty with which the selected cadence is maintained. More elaborate systems analyse cadence, torque and speed and depending on them vary the induced power to maintain the displacement at user-defined parameters. Basically, on a variable terrain, the engine decreases or increases the power generated depending on the ascent or descent.

This mode (throttle assist mode) works like a conventional engine, ie once activated it generates the power indicated by the user, regardless of speed or whether the user is pedalling or not. Basically, the mechanism is similar to an accelerator lever mounted on the handlebars or can have the shape of a finger-operated button, with which the user adjusts the level of operation of the engine. The advantages are obvious, because at more difficult starts or more demanding areas, you can use the engine without being conditioned by pedalling, but this comes with the price of high battery consumption. Also, in different countries or regions, such electric bicycles

are subject to strict regulation, so you may need a special permit or approval to use them. 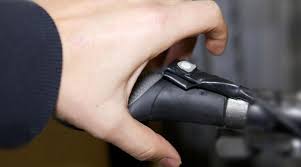 Last but not least, more and more e-bike models offer both modes of operation, either by switching on / off one, or by triggering the throttle mode once the special button is activated.

Manufacturers will often provide estimates of the range of different models of electric bicycles, but these are approximations and the battery level can be influenced by various factors related to use. The user's weight, how much he rides, the level difference of the route, the tire pressure and how loaded the bike is are all factors that will influence how long the battery lasts. Even with the same user, on the same route, the battery can last more or less depending on the direction and speed of the wind. At the moment there is no standard system for determining the exact battery life, similar to that of cars for fuel consumption, but having some basic knowledge of certain parameters will allow anyone to assess how much can be based on the battery.


The motors are classified according to the number of watts. Normally, electric bicycle motors have from 250W to 1200W, and the more power, the higher the energy consumption. Here are some relevant features:

Voltage - indicates the potential power of the battery. A higher voltage ensures higher power, and the typical values ​​are 24V, 36V and 48V.

Amps / hour - indicates the number of amps that can be generated in an hour, and usually this value varies between 8 Ah to 20 Ah.

Watts / hour - indicates the battery power level calculated in watts / hour. It is obtained by multiplying the voltage by amperes / hour. Usually, an electric bicycle will consume somewhere between 8 and 16 watts / hour for each kilometre travelled, the volume varying depending on the factors described in the initial paragraph of this chapter. Therefore, by calculating the number of watts / hour and dividing it by the watt / kilometre estimate, a realistic range estimate can be obtained.

The example above is just a … example, and a rare route can be perfectly flat, in zero wind conditions, so that reality can accurately copy the calculation, so making a margin of error can prove to be a wise decision.

Manufacturers do not always publish this information in full in the presentation brochures, but knowing the voltage and the number of amps / hour, the remaining values ​​can be deduced. It is also recommended some tests on different types of land for a clearer idea of ​​energy consumption.

The most advanced systems also offer a real-time estimate of autonomy, even with the option of displaying the distance that can be covered depending on the battery level. With this amount of information available, it becomes increasingly unlikely that the user will suddenly run out of battery.


When it comes to batteries, most electric bikes use lead- or lithium-based batteries, while nickel loses accelerated ground. The most popular at the moment are the lithium ones. Lead - lead batteries are the most affordable and widespread in the world of electric bicycles. Their useful life is short if they are frequently used until full discharge, and their weight is a disadvantage.

Nickel-Cadmium - Nickel-cadmium (NiCad) and NiMH batteries are much lighter and have more autonomy than lead batteries, but as polluting as the environment, so environmental standards have discouraged strong their use.

Lithium - Lithium batteries are light and efficient, which currently makes them the most common choice for powering an electric bicycle, especially since their technologies are also used to power other electric vehicles, such as Tesla cars.